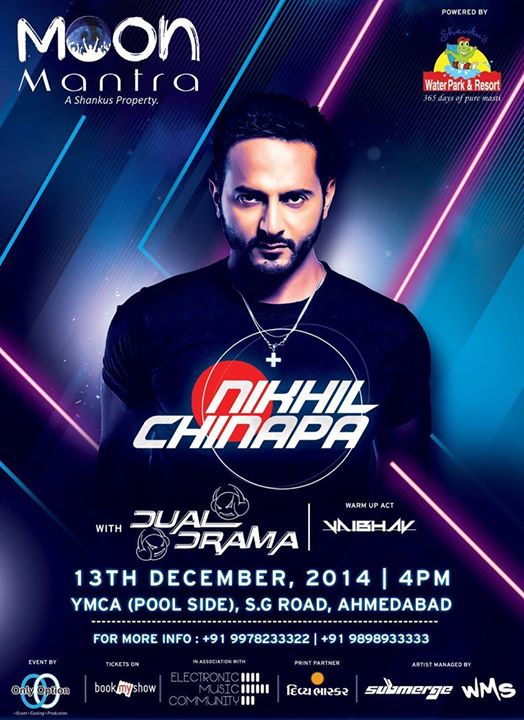 NIKHIL CHINAPA
To say that Nikhil Chinapa has donned many an avatar during his career, is like saying it snows in Alaska; a bit of an understatement. He morphs from DJ to VJ to MC to Music Promoter to Festival Director —some of his best known avatars — with amazing fluidity.
He studied Architecture and graduated with a Thesis in Hospital Design. A year later and for reasons that scientists are still trying to understand, Nikhil joined MTV. He said, “I think it’ll be fun.” For once, he was right.
At MTV, Nikhil has hosted almost every show the channel has aired. From MTV Select – MTV’s longest running show, (it aired continuously for 10 years) to being the host of Splitsvilla, a judge on Roadies as well as Rock On and now host of MTV Mashups.
Nikhil’s Mom still thinks he’s an idiot though and should get a real job.
Nikhil was also the co-founder of Sunburn. He is now the Festival Curator and partner of Vh1 Supersonic, Goa’s brand new beach music festival.

Started nothing less than a revolution, this energetic duo has already established their name in the fast growing electronic music family of India.

In less than a year, they have established their mark across the country in cities like Goa, Delhi, Bangalore, Mumbai, Ahmedabad, Bhopal, Jaipur, Lucknow etc. and shared the console with Gareth Emery, Starkillers, Ashley Wallbridge, Ali WIlson, and many more. Their performance is high on energy which drifts from Electro / Wobbly sounds to Drum and Bass at the later half of their set.

Being the runner ups for Group Therapy India’s contest by Submerge music and #MyFav in November 2013 and having their fans spreading all across rapidly through their weekly podcast – “DDR – Sessions”, they are now set to take it to the next level in 2014.